Modest fashion is currently creating waves in the global fashion scene. Designer and high street brands are hanging more modest styles on their racks with items that have long sleeves and hemlines. Certain designers have added religion-specific items such as hijabs and abayas to their runway collection.

There are several reasons for modest fashion’s emergence. First, is the internet. Reina Lewis, who teaches cultural studies at the London College of Fashion, stated that “the internet made it possible for savvy, underserved religio-ethnic individuals and groups to start providing both the products and content that they were missing.” It was 2015 when modest fashion hit the mainstream.

Second is the growth of the halal market, which will be worth US$8 trillion by 2030. The value of the current halal market is already nearly US$3 trillion. According to The Edge Markets, these numbers will also grow due to “consumer awareness of halal benefits among both Muslims and non-Muslims.” The size of the halal fashion market was enough for designers and casual brands to take notice.

The last reason is largely societal. This trend does not symbolize a return to absolute conservatism. Instead, it symbolizes progress, tolerance, and the celebration of diversity in cultures and beliefs. Modest fashion is not Muslim, Christian, or Jewish. It exists in many religious cultures. Believers of different faiths produce and distribute “modest fashion” content on their blogs and social media channels. Their motivations may differ from each other, but they discuss the same topic.

Some critics will posit that there is a certain contradiction between modesty and progress. However, those criticisms merit a separate discussion. Celebrating diversity gives women more space to express themselves individually according to their culture and what they choose to believe in. Catering to individual preferences helps fashion brands become attractive to more customers.

The Appeal of Modest Fashion

Progress in fashion is one of the biggest reasons that draws women to modesty. Modest fashion is no longer drab and dark. Designers are able to introduce new styles and cuts due to fashion developments while staying true to their cultures and beliefs. Women from all belief systems find modest fashion items appealing because of their colors, styles, fabrics, and textures. Modest dressers have also found ways to accessorize and accentuate the beauty of their wardrobe.

The acceptance of modesty as a mode of fashion diversifies fashion as we know it. Boutiques still sell crop tops and bikinis. The only difference is that they’re also beginning to sell burkinis and abayas alongside them. Websites like HijabDressUp exist because of this growing appeal.

Innovations in various industries stay. Certain trends may wane, brands may disappear, but diversifications stay, especially if they exist to serve more consumers. So the answer to that question is yes. Modest fashion will progress from being a trend to a necessary style of clothing, especially with the rapid growth of the Islamic market and openness of divergent views.

Trendy Ways to Wear Your Hijab for Summer 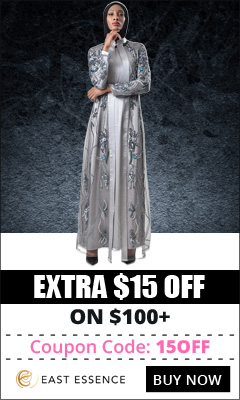